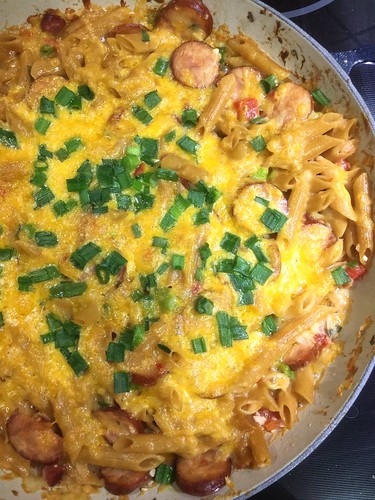 Since daylight savings time ended a couple of weeks ago, it seems like my evenings are flying by. It doesn’t help that it’s dark just after 5pm…it just mentally throws me off to where I feel behind, no matter what time I start cooking. So lately, I’m a fan of quicker meals.

I’m pretty sure I’ve made this dish at least a handful of times the past couple of months. It’s a quicker recipe, and you only need one (oven-safe pot) to make it happen. I didn’t think I’d really like this dish, but the combination of flavors and the subtle richness from the heavy cream, makes for a quick comfort food (perfect for weeknights).

You can also lighten the recipe up with a few adaptations. I sometimes substitute regular sausage with chicken or turkey sausage. I also have used whole wheat pasta with success. However, I haven’t messed with the heavy cream in the recipe. I feel like it’s such a small amount for the entire dish, and it just goes well with the cheese in the recipe to make for a wonderfully creamy dish.