Disclosure: I received a copy of “Baking Chez Moi”, as well as a gift card and coupons for ingredients used in this recipe, in exchange for this sponsored post. All opinions are 100% my own. 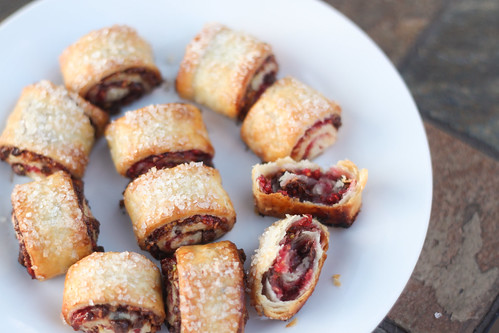 So, this past long weekend threw me way off. Our house is decorated for Christmas, and it’s officially the holiday season. Maybe it’s because I’m getting older, but it really doesn’t feel like December. Sure, the UPS guy probably knows us on a first name basis by now, and my dog is randomly bringing me ribbon scraps, but it just doesn’t FEEL like the holiday season. I’m sure the 70 degree weather outside isn’t helping right now, either. Where did the year go?!

I’m actually fairly behind on things. By now, I would normally have my homemade holiday gifts planned out, but I haven’t even made the cookie dough yet to place in the freezer..heck, I haven’t even chosen the recipes to make! Yikes. I still need to do that…haha.

In the meantime, I’m still baking on the weekends (and my/my husband’s coworkers are loving it). I was recently sent a copy of Dorie Greenspan‘s latest book, “Baking Chez Moi“. I just adore Dorie Greenspan, so when I was approached about this post idea, I couldn’t reply soon enough! Her tall and creamy cheesecake is my favorite recipe of hers, which I make at least 5 times in November and December (between Thanksgiving and Christmas). One of the things that makes Dorie so wonderful is that she makes intimidating recipes completely approachable to the home baker. She writes out everything in perfect detail to where you feel like she’s right there in the kitchen with you. This book is no different. The instructions are perfectly detailed, and her recipes are mouth-watering. Her book contains recipes, like limoncello cupcakes, gingerbread buche de noel, cocoa linzer cookies, caramelized rice krispies…just to name a few. I have so many recipes bookmarked already!

For this post, I was asked to incorporate Driscoll’s berries into her famous rugelach recipe. While I’ve had rugelach before, I’ve never made it. After a bit of brainstorming, I thought that raspberry, pistachio and dark chocolate would go together perfectly in this bite-sized dessert. I’ve used the cranberry/pistachio/white chocolate combination before in biscotti, so I had a feeling this combination would work. Also, after making it, if you look at the picture, don’t they look like peppermint swirls? So festive for the holiday season!

As for the recipe, it tasted great! I reduced a pint of Driscoll’s fresh raspberries (along with sugar, lemon juice and zest) to a spread-like consistency (to avoid watering down the cookies), and sprinkled finely chopped chocolate and pistachios on top of the raspberry spread to make the filling for the rugelach. This combination works so well…sweet raspberries, melted chocolate with a hint of crunch from the pistachios? Oh man, I love it! My coworkers also went crazy over these the next day…they were perfect with a morning coffee. 🙂