You are here: Home / Random / A Bunch of Randoms

Is it just me or is it really hard to resist holiday make-up sets? I don’t even need any make-up. I own more eyeshadow palettes than I care to admit, and I ran out of room in my organizer for lip glosses. The holiday sets are just so darn pretty!

I’ve been back on the weight loss journey, and I keep thinking back to when I was 70 lbs. down (which was April 2013). I don’t know where my willpower went, but if anyone sees it, can you please tell it to head back to Louisiana? I’m going to really need it (especially) these next few months!

Why is it still in the upper 80s outside? Just walking from the parking lot to a building makes my hair stick to the back of my neck. SO GROSS. I’m over it. (Although I’m sure I’ll be begging for 90 degrees in mid January…) We’re supposed to be getting a “cold” front this weekend, and I’m totally forking out my boots…even if the cold front makes it 70 degrees or something silly like that. I’m ready to knit a cowl (or 10).

I pre-ordered the iPhone 6 Plus a couple of days after the pre-ordering opened, and I’m just itching to get my mitts on it. I’m actually sort of bummed with the phone I have right now. At the time, AT&T was offering a $200 gift card trade-in deal for my old 4S, but it was only valid until 9/30. Sadly, when I went to order, I found out that I wouldn’t receive the phone I wanted to purchase until November…that’s right…NOVEMBER. The rules at the time stated that it needed to be traded in by the end of September, so I dug out my 3GS and activated it (to take advantage of the trade-in on my 4S). It’s crazy how much slower my 3GS is vs. my 4S. Erg. First world problems! (Oh, and I kept saying at the time, because apparently a couple of days later, AT&T changed the trade-in offer to be valid as long as you pre-ordered before the end of the month, regardless of how long it took for the new phone to ship out.. Just…my….luck.) 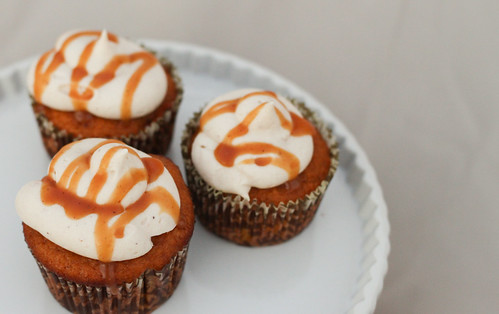 These cupcakes…ugh. I totally want to make a batch. However, I’m worried about the lack of willpower (see 2.), because I’m fairly sure I’d eat 3 of them and regret it 30 minutes later. Actually, I probably wouldn’t regret it, because those cupcakes are worth it :-P. ::sigh:: (See the mental dilemma?!) Getting back on the weight loss wagon is hard work, y’all!