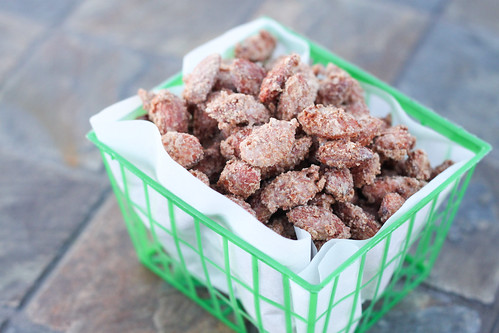 The other day, I went to the mall and saw fall merchandise in the stores. I know it’s August, and it’s too soon…however, if you’ve read this blog for a while, you know I get crazy excited about seasonal changes early on. 🙂 In fact, this past weekend when I was at Starbucks, I asked the barista if they had pumpkin ANYTHING in the store. They had bread, and I totally ate it in 100 degree weather, while dreaming about cool, crisp fall weather and pumpkin spice lattes. 🙂 Is anyone else itching for fall?

I made these almonds a while back for my husband, since he’s crazy obsessed with almonds lately. He really loves Trader Joe’s Cinnamon Sugar Almonds, and I knew it would be a lot cheaper for me to purchase the raw almonds myself and make these for him.

I decided to make these when he was out of the house, so it could be a surprise when he got home. This recipe was super simple to throw together, and oh man, it made our house smell like one of those roasted nut carts that they have in the mall around the holiday season. It was well worth making this recipe, and I’m thinking about making these around the holidays for gifts now!