This is one of those dishes that is a simple, weeknight hit in our house. I’ve already blogged about it here and here (post with a recipe), but I figured another time shouldn’t hurt.

This is a great W/W dish to cook up in your home, so definitely give this one a try!

I’m always looking for new, healthy options to cook for dinner. I came upon this recipe from Cooking Light, and got really excited because my husband and I are huge garlic nuts!

I will say that this recipe was fairly good and very easy (great weeknight meal to make), but the sauce definitely needs more spices than what is mentioned in the recipe. However, I’m from Louisiana, so take that with a grain of salt if you aren’t used to spice, but I had to sprinkle some serious Tony Chachere’s on this. I probably will make this again with heavy adaptations, since it’s a good, healthy base sauce for pasta.

The Skinny – per serving, Serves 4

Note: I loaded up on more mushrooms than chicken to make my meal stretch further calorie wise. That is not reflected, however, in the nutritional facts.

Mushrooms are 15 calories/cup and barely any fat, so load up if you want! 🙂

After a pretty full day, I wanted to make the hubs and I something easy and enjoyable. I’ve seen this recipe from Campbell’s for quite some time and was hoping that it would be a great recipe. I will say it had some really great flavor, but this recipe had some issues that I will take note of for next time.

First off, some of the rice ended up extra soft and some was still crunchy. I’ll have to be sure to stir occassionally while it’s in the oven to ensure that the rice is evenly cooked for next time.

Also, the recipe states that it needs to be covered the whole time it’s in the oven. However, after 50 minutes, it was still very watery. I had to keep it in the oven uncovered for a while after to let it evaporate, but it was still slightly watery even after that. Next time, I’ll uncover it when it’s halfway done to make sure it evaporates enough to make a thicker sauce for the chicken and rice.

I ended up omitting the vegetables called for in the recipe, since the hubs isn’t a fan of mixed vegetables. So, as you can see, dinner was pretty carb-y with the addition of some yummy garlic bread!

The Skinny – per serving, serves 4

Here’s another recipe from Ellie Krieger, out of the book, The Food You Crave. This was REALLY good. We ended up saving the leftover meatballs and sauce to make whole wheat meatball poboys another night. In fact, I found the sauce to be way better as leftovers, since the flavors developed more!

I was searching for the perfect beef stew recipe, and was pointed out to this recipe by someone on the What’s Cooking board that I frequent. I have to thank her so much for pointing me to this recipe because I would have never made it or known to search for it. 🙂 This was a wonderful recipe! FI went for seconds and he RARELY does that for anything I cook! I guess my skills are growing!

Note: To make in a slow cooker, prepare through Step 2. Place beef mixture in an electric slow cooker. Cover and cook on HIGH for 5 hours.

I’ve been challenging myself to cook more often when I’m at my fiance’s house. Lately, the cooking has been so-so until now. This recipe has been the BEST recipe I’ve made, and it’s Weight Watchers friendly!!! I made this using the non-crockpot method, because we didn’t want the meat too tender. My fiance requested rice with this dish, instead of pasta as well, which was a WONDERFUL combination :).

I was given this recipe from a knottie on my club board. It was a pdf form of Weight Watchers recipes, so I don’t really know the original source, however, I will say this isn’t mine. I did adapt it, though, for more flavor. 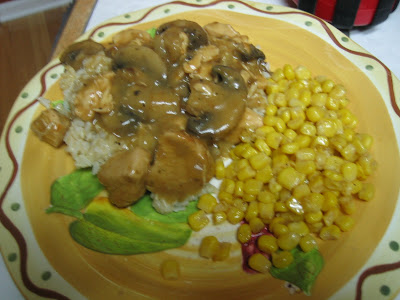 Check out our new funky plates. They match our kitchen perfectly! 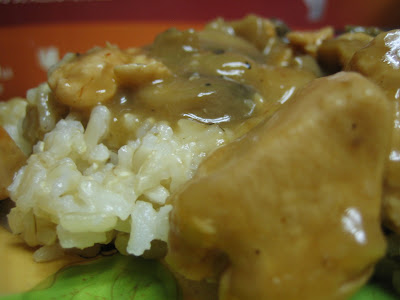 Here’s a zoom-in of the yumminess!

Since I had 1 cup of brown rice with mine, this dinner was 11 points. Yep, a little on the high side, but this was some SERIOUS comfort food. 🙂 I will be making this again when the fall comes!!

This dish was a side we had for the mexican night themed dinner tonight. This recipe is from All Recipes and came highly rated, so I went for this one. It came out perfect, but wasn’t the mexican rice I’m used to at restaurants but this was still great!

In a medium sauce pan, cook rice in oil over medium heat for about 3 minutes. Pour in chicken broth, and bring to a boil. Stir in onion, green pepper, jalapeno, and diced tomato. Season with bouillon cube, salt and pepper, cumin, cilantro, and garlic. Bring to a boil, cover, and reduce heat to low. Cook for 20 minutes. In cleaning out the freezer on Sunday, there was a bag of frozen shrimp in there, and I thought, well I need to do something with this before it’s forgotten in the back of the freezer (you know how that goes). Thanks to Danielle of Joseph’s Wife for reminding me of the Laughing Cow Alfredo recipe that is talked about frequently on the Weight Watchers forums. I used to make this as a quick fix in college when I did Weight Watchers, but I forgot about it…it’s a wonderful recipe but I make it a slightly different way than mentioned in the posts. I prefer a thinner sauce, because this turns out extremely rich.

Dice green and yellow onions, along with the garlic clove. Place in a Pam sprayed skillet and cook for a minute. Add shrimp and cook for a couple minutes, until the shrimp is done.

In a small pot, place LC cheese, milk, margarine, parmesan cheese and powder together. Keep on low until it melts, mixing ever so often. You may want to start the sauce first because it takes the longest.

In a larger pot, boil spaghetti.

After the spaghetti and alfredo are done, add to the shrimp and combine together (either in the skillet or the pasta pot…wherever it all fits). Add pepper to taste! ENJOY!

Points Value: 5 points and a VERY hefty serving at that!! Enjoy 🙂